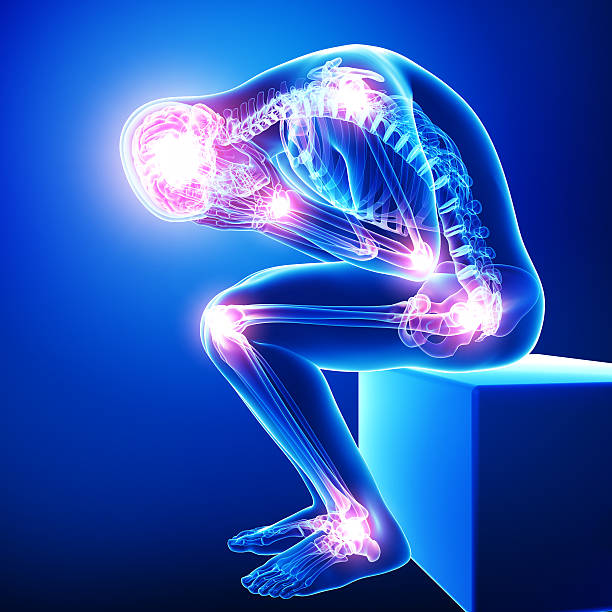 Pain is often tied to appetite, sleep disruption, symptoms of depression and so much more. Whether you’re dealing with occasional sore muscles, or minor aches and pains, managing your comfort is no small feat. But for those who suffer from chronic pain, related to injuries or autoimmune conditions, finding natural alternatives to NSAIDs can become an overwhelming task.

There has to be a better way; a way that works with your body’s natural processes to relax muscles, calm nerve irritation, and promote mobility without the disabling side effects of pharmaceutical opioids.

The relentless pain that accompanies cancer treatment can be so severe that experts now refer to it as a condition in and of itself. Cancer pain can affect bones, organs and nerves. Traditional opioid and opium-derived pain killers, like morphine and codeine, provide temporary relief, but not without consequences, like constipation, over sedation and worse, addiction.

According to CDC National Vital Statistics System (NVSS), from September 2019 through August 2020, they predicted there would be 88,295 opioid related deaths.  This set a record high of almost 19,000 more deaths (27%) than the prior 12-month period.

Then, as if it couldn’t get any worse, total overdose deaths spiked to record levels in March 2020 with the onset of the pandemic.  U.S. overdose deaths had never risen above 6,300 per month, making it the largest single-year increase in 20 years.

Maybe it is time to look at natural alternatives.  Here are some herbs that many have had great results from, while avoiding all the side effects of pharmaceutical pain medication.

Perhaps the greatest attribute to the herb, Skullcap, aka Scullcap (Scutellaria lateriflora), is its ability to relieve stress, tension, anxiety, nervousness and panic attacks. It is a bitter herb with cooling properties to soothe fever related pain.

Skullcap is very effective in acute pain situations, but can also be taken over time to decrease chronic stress.  When combined with Passionflower, this herb can help you cope, immediately, when shock related anxiety occurs and can be carried with you for sudden onset anxiety or panic attacks.

But this is not just for acute cases.  Skullcap  can be taken over time to support your nervous system in stressful environments.  While there are many herbs that contain relaxing nervine, many of those, like Valerian Root (Valeriana officinalis), Kava Kava Root (Piper methysticum) and Hops Flower (Humulus lupulus), can promote drowsiness. Skullcap does not.  It has a unique ability to relieve acute anxiety and soothe mental and emotional excitation and irritability, brought on during overstimulation by heat and brightness.  And all of this occurs without drowsiness. The overall benefit of Skullcap  is to reduce inflammation, relieve spasms and headaches, and to provide sedative relief. Skullcap  also promotes healthy sleep and reduces muscle tension. Both Skullcap  and another pain relief herb, California Poppy (Eschscholzia californica), work well together to alleviate pain and calm the symptoms associated with chronic pain.

All the way back to the herbal applications use by Native Americans and Native Hispanics the leaves and flowers of California Poppy has been used as a sedative and to promote analgesic activity, sound sleep, and to relieve toothaches; especially in children. Every part of this plant has been used in herbal remedies; the roots, the leaves, and the seeds of its flower are often used in supplements.  And because night pain often leads to insomnia, California Poppy can also calm emotional distress and promote healing sleep.

While the poppy is distantly related to the opium poppy, it contains no opium; California Poppy is a natural alternative to narcotics. This herb so intrigued medical practioners in late 19th century.  In an 1893 medical textbook it was reported that “the effects produced by Eschscholzia californica (California Poppy) upon patients is the same as that of morphine, without the inconvenience of the latter drug“.

Research on California Poppy has demonstrated benefits for anxiety, pain and insomnia, and it has shown great promise as an effective way to reduce opioid withdrawal symptoms. It is thought that this herb prompts the brain to react to certain chemicals that occur, naturally, in the California Poppy, and simultaneously promotes GABA activity (GABA attaches to a protein in your brain known as a GABA receptor, it produces a calming effect).

Ginger Root is also helpful when trying to control pain and inflammation. It lowers the number of prostaglandins (molecules that indicate pain), and is effective in reducing the feeling of nausea and discomfort. Research suggests that regularly consumption of ginger can help relieve rheumatoid arthritis and osteoarthritis. And as an added bonus ginger may help to prevent some side effects, particularly digestive, currently associated with conventional painkillers, as well.

Studies have shown, in women with equally severe menstrual pain that the pain-relieving properties of ginger, when compared to ibuprofen or a prescription NSAID, were found to be equally effective.  Ginger has also been used as an alternative to triptan medications for migraine headaches, showing relief within two hours.

Ginger Root (Zingiber officinate) works well with Turmeric.  Both ginger and turmeric are rhizomes, or root stalks, used globally, not only as seasoning, but also in traditional herbal medicines. There is reason to believe that ginger and turmeric both contain active ingredients that can provide at least some relief to those suffering from a number of painful conditions, from arthritis and gastric discomfort to migraine headaches and post-surgical pain.

Turmeric (Curcuma longa)is a commonly used spice in Southeast Asian, especially in Indian and Thai cuisine. Curcumin, an active compound in turmeric, is known for its antioxidant and anti-inflammatory activity that can promote healing. .Curcumin is known for its anti-cancer properties; searching for pain-causing free radicals and destroying them, while simultaneously suppressing pain. A study conducted by a New York-based cancer research center concluded that turmeric was more precise than aspirin in quelling inflammation

Like Ginger, studies have found that turmeric may have pain-reducing power equal in some cases to that of prescription and over-the-counter medications. In clinical studies, Turmeric’s anti-inflammatory action appears to help improve rheumatoid arthritis, post-operative inflammation, Crohn’s disease, ulcerative colitis, irritable bowel syndrome, and stomach ulcers.  While both Turmeric and Ginger can reduce the incidence and severity of flare-ups of rheumatoid arthritis inflammations, Turmeric had significantly more anti-inflammatory and antioxidant power than ginger for this particular application.

Pain does not have a yes or no answer.  It is a multiple choice answer; and only you can decide what works best for you.  But just know, that you have options.

Always discuss your health care decisions with your primary care giver, especially if you are using prescribed medications or have underlying conditions or are pregnant or nursing.