The Eight Most Popular Herbs and Why 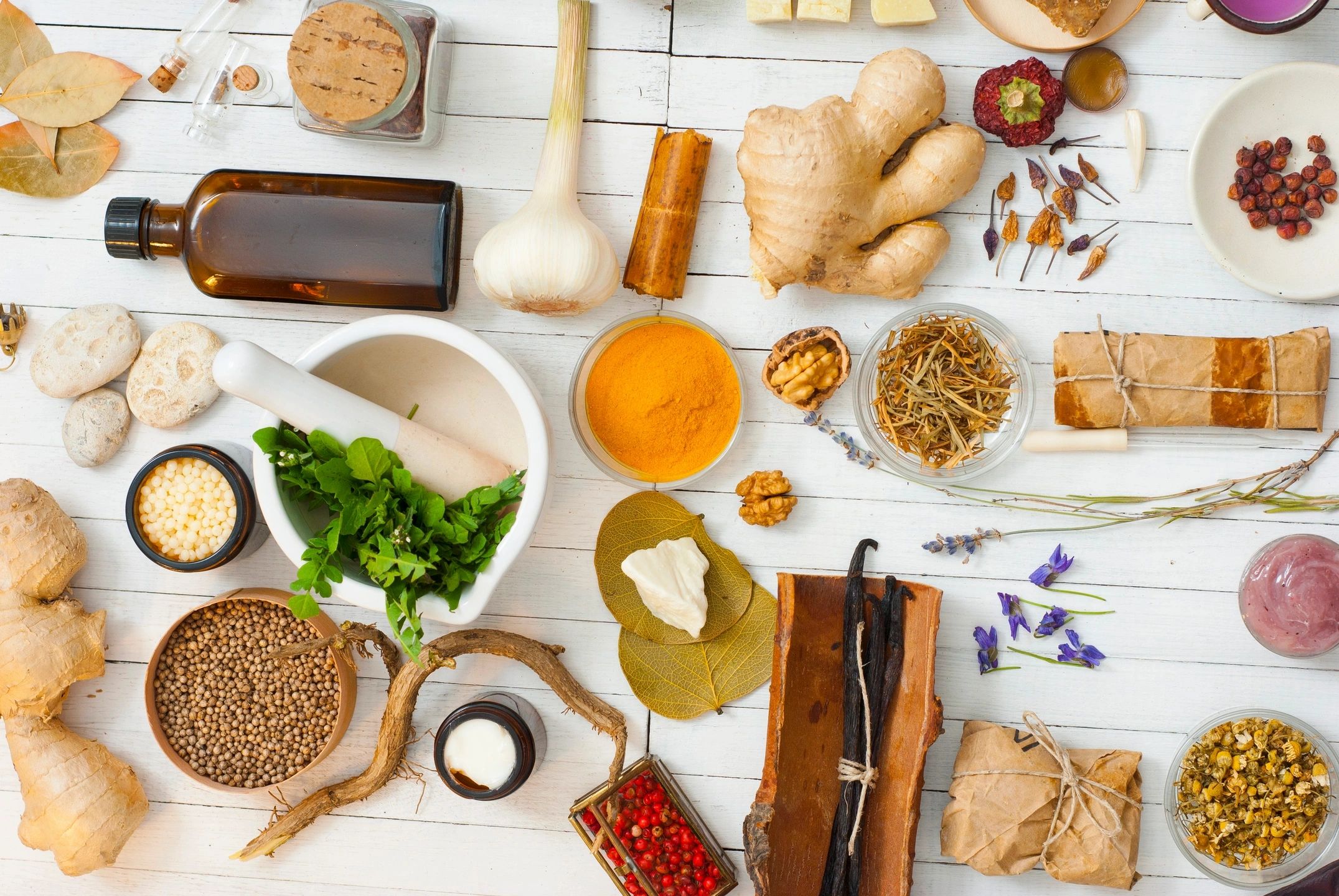 The Food and Agriculture Organization estimated in 2002 that over 50,000 medicinal plants are used across the world. The Royal Botanic Gardens, Kew more conservatively estimated in 2016 that 17,810 plant species have a medicinal use, out of some 30,000 plants for which a use of any kind is documented. It can be a bit overwhelming, but here are eight go to medicinal herbs that have widely accepted uses.

Echinacea Root (Echinacea purpurea) is so much more than our image of a pretty, purple coneflower.  The most common use of Echinacea is to shorten the symptoms of the common cold.  Echinacea is relatively safe, but research is ongoing as to the benefit as an immune booster when a virus is present.

The earliest known use of Echinacea as a medicinal herb goes all the way back to early Native Americans.  It has been used for centuries to treat and prevent colds and flu (primarily for upper respiratory infections) and for infections and wound care.

This herb should only be used as needed for short term, as long term use may adversely affect your immune system.  Always check with your healthcare provider about any interactions with medicines that you are already taking. People allergic to plants in the daisy family, which includes ragweed, chrysanthemums, marigolds, and daisies, may be more likely to have an allergic reaction to Echinacea.

Ginkgo Leaf (Ginkgo biloba) is one of the oldest homeopathic plants and a popular herb in Chinese medicine. The gingko tree is considered a living fossil dating back as far as 270 million years ago and they can live up to 3,000 years.

It is, perhaps, best-known for its ability to boost brain wellness. Some studies have concluded that Gingko may be an effective treatment for patients with mild to moderate dementia and may slow cognitive decline in both dementia and Alzheimer’s patients.

Recent studies are exploring a component in Gingko that may have beneficial properties for diabetes and healing properties for bone related issues.  Ginkgo has also been used to treat asthma, bronchitis, fatigue, and tinnitus.

Only extract from leaves should be used because the seeds contain a ginkgo toxin. Because some information suggests that ginkgo can increase the risk of bleeding, it should not be used with nonsteroidal anti-inflammatory medicines, anticoagulants, anticonvulsant medicines, or tricyclic antidepressants. Long-term use may compromise thyroid and liver health and may interact with blood thinners. If you are taking prescription drugs, always consult your doctor for drug interactions.

Ginseng (Root)  There are many different species of ginseng that can be found all over the world and there are 13 species of ginseng specifically classified under the name ‘Panax’ (from the Greek “all healing”). Ginseng has historically been used as a tonic and aphrodisiac, among its other benefits.  But there are many varieties; each with their own unique characteristics. Here are few.

Ginseng Root/White Ginseng-Panax may help protect against radiation damage, stress, fatigue and high blood sugar. It has been used to treat viral infections, bronchitis, depression and digestive disorders and for reinforcing the spleen. It is considered to be tranquilizing for the mind.

Ginseng Root-Korean Red/Panax Ginseng (Shui chu) has been used to increase male hormone production. The herb has been found to be helpful for poor circulation, and it may also increase energy. This variety may even give relief for menopause symptoms and migraines.

Ginseng Root – American (Panax quinquefolius) tranquilizes your brain while moderately stimulating your organs. The herb has been used for stamina and energy and to improve resistance to infection. Traditionally, it has also been used to lower cholesterol, as an aphrodisiac and for fertility.

Possible side effects of Ginseng Panax varieties may include high blood pressure and tachycardia. While Ginseng is considered safe by the FDA, you should not use if you are using warfarin, heparin, nonsteroidal anti-inflammatory medicines, estrogens, corticosteroids, or digoxin or have diabetes

Goldenseal Root (Hydrastis canadensis) has been used to treat diarrhea and as an antiseptic. Goldenseal contains the plant alkaloid, berberine, historically used in both Ayurvedic and Chinese medicine. Goldenseal can be applied topically for rashes, ulcers, wound infections, itching, eczema, acne, dandruff, ringworm, herpes blisters, and cold sores. It is used as a mouthwash for sore gums and mouth. It has also been used as an eyewash for eye inflammation and conjunctivitis, or “pink eye”.

Native to areas with rich, moist soil, Goldenseal is a member of the buttercup family. Native Americans revered this plant for its medicinal, cultural, and practical uses. The Researchers, enamored with this discovery, used purified forms of the crude herb known in the commercial market as hydro chlorates of the alkaloid berberine. These preparations did not yield the same results as the concentrated whole plant extract and were soon abandoned.

Milk Thistle Seed (Silybum marianum) is a natural remedy for many common conditions related to the pancreas, spleen, and liver, Milk Thistle, originating in the Mediterranean, has been used for more than 2,000 years. This bitter herb has been found to offer defense against hepatotoxic agents, and aids in liver injuries. Milk Thistle extract was used by early medical practitioners to handle congestion in the kidneys, spleen, and veins.

Some early research into the herbal benefits indicates that the active agents in Milk thistle may have anti-cancer effects. It is found to have powerful anti-oxidant qualities and has been proven to inhibit the development of breast cancer, prostate cancer and cervical cancer cells in test tubes.

But the benefits of this organic herb do not stop there.  The latest studies show that Milk Thistle has a broad range of benefits, from the treatment of rosacea, psoriasis, and eczema, to reducing excess iron in the body.

With its ability to increase bile production in the intestinal tract, it helps to soften stools while acting as a mild laxative to encourage regular bowel movements. In traditional medicine, Milk Thistle has been used for vomiting, pneumonia, flatulence, constipation, and hemorrhoids.

A free-radical scavenger, Milk Thistle protects the liver from toxins and pollutants by preventing free radical damage, and stimulates the production of new liver cells. It is considered a remarkable herb for relieving temporary discomforts associated with cirrhosis, alcoholic poisoning, jaundice, fatty liver, hepatitis and viral hepatitis. In the treatment of hepatitis C, Milk Thistle has been shown to lower liver enzymes and reverse the kind of liver damage common in those with the condition.

Silymarin, a mixture of flavonoid complexes, is the active component of Milk Thistle that protects the liver and kidney cells from the side effects of butyrophenones, phenothiazines, acetaminophen, halothane, Dilantin, insecticides, tetrachloride, and even chemo and radiation therapy. Milk Thistle, according to research done in 2010, may lessen inflammation for those undergoing chemotherapy it seems to help patients endure higher doses of these drugs.

Sometimes diabetes results in chronic liver damage, and the liver is no longer able to respond to insulin.  Milk Thistle may promote and regulate normal blood sugar levels. New studies show that it may also help lower blood sugar.

Milk Thistle also regulates the digestion of fats and may be beneficial in preventing arteriosclerosis and strokes. The properties in this herbal tincture are believed to promote normal cholesterol levels and help the liver convert LDL (bad cholesterol) into HDL (good cholesterol), as well as the regulation of membrane permeability and stability and prevention of deposition of collagen fibers, which leads to cirrhosis and plaque, or arterial hardening.

The Milk Thistle extract, silibinin, kills skin cells mutated by UVA radiation and protects against damage by UVB radiation. It is also believed to have the ability to increase the production of bile, helpful properly cleansing the blood, which can be helpful for acne and other forms of skin disorders. Silymarin increases glutathione, a detoxifying protein said to be deficient in psoriasis sufferers by hydrating and softening dry, red skin.  You will notice a dramatic softening and moistening of dry, cracking skin and a noticeable glow and radiance to your skin’s quality. Always check with your health provider to determine the cause of acne, unusual skin spots or skin irritation.

Silybum marianum has been compared to fluoxetine in the treatment of obsessive-compulsive disorder, OCD, and in fact, many herbs with psychotropic effects. The liver is thought of as the ‘seat of anger’, that houses are darkest emotions, which is why liver problems are associated with resistance to change, anger, fear, and hatred. Regardless, if you are having problems with a sluggish liver, you are miserable. Milk Thistle liquid extract is a well-known medicinal herb which can play a key role in relief of headaches, and problems with insomnia, headaches, difficulty awakening, difficulty in concentrating and poor memory.

Milk Thistle supports hormonal balance and is one of the best plant extracts for your health.  The liver helps to filter toxins from the body, including excess hormones. Commonly called Blessed Thistle, Marian Thistle and Holy Thistle, the herb is traditionally associated with the ability to promote lactation and increase the production of breast milk in nursing mothers.

Saw Palmetto Berry (Serenoa repens) is beneficial for male and female reproductive organs and may be helpful for ovarian diseases. Men can benefit from the properties of Saw Palmetto for better prostate health.

It is said to be helpful in treating many prostate disorders, including prostate enlargement and the discomforts of frequent urination. Saw Palmetto is an excellent diuretic and a urinary antiseptic and is considered to be an aphrodisiac by many herbalists, for both men and women. Saw Palmetto is said to support mammary gland health and may be helpful in controlling polycystic ovarian disease and cystitis by decreasing a hormone called androgen that stimulates male characteristics in women.

Saw Palmetto, as an overall tonic for good health and is very helpful for those who are convalescing or who suffer from autoimmune disorders.  It is also an old remedy for coughs due to colds, as an expectorant and for bronchitis and asthma

Turmeric (Curcuma longa) has been used Ayurvedic practice for 4,000 years, Originating in India. With its deep orange hue, Turmeric is believed to have anticancer properties and to prevent DNA mutations.  And recent research shows promising results when turmeric has been used for a variety of dermatologic diseases.  Because Turmeric has low bioavailability, combining the herb with pepper can help your body absorb more of its benefits.

Valerian Root (Valeriana officinalis) is used to treat sleeplessness and to reduce anxiety. Did you know this herb, in the United States, is used as a flavoring for root beer and other foods?

Valerian Root can give you a good night’s sleep and reduce night awakenings; all without the after effect of morning grogginess. It also helps during recovery from shock and sudden emotional distress. It has been used as a remedy for St. Vitus Dance, vertigo, fainting, epilepsy and convulsions and hyperactivity.

Today we live in a world of manufactured medicines, but it is comforting to know that the power of nature is on our side, and that we have access to an arsenal of natural  herbal choices to complement our approach to healing and to good health.

As with any medicinal herb, always talk with your healthcare provider before using.